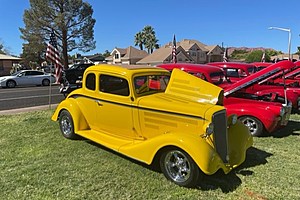 We had SO much fun at Swiss Days in Santa Clara.  Yes, there was loads of food and lots of Swiss heritage stuff on display but it was the car show that really got my attention.  Some are simple and some outstanding but all worth seeing.

Even the people who drove this Army Jeep probably didn't know someone would preserve it to be in car show condition all these years later.

There's a story to every car or truck on the grounds.  When you go to a car show, make sure to take a few minutes to talk with the person in the lawn chair next to each one.  They ALWAYS have a story and they are always fun to talk with.

Sometimes you just have to stop and say, "Wow".

That's the owner of this Rolls Royce under that hat.  I was joking with him that, "I was going to bring out MY Rolls Royce today but... I didn't do that well in college so I don't have one".

Imagine your date pulling up to pick you up in this.

Some of these aren't as flashy as others but they are so well cared for, it makes you stop and look.

I would probably cry if this was in my garage.

Show room beautiful.  It's HOW OLD?

My mom always talked about cars with a "Rumble Seat"  Yes, that's the rumble seat on the back.

My wife loved this little car.  It is a Nash Metropolitian.  An American car that was assembled in England and sold here from 1953 to 1961.

This Corvette was incredible and I talked with the owner who had all of the photos from the build.  It was quite a project.  They came with a cool 327 but he found a Chevy 427 and it fit, so why not?

Yes, this is a cool car.  Wait 'til you see what's under the hood. 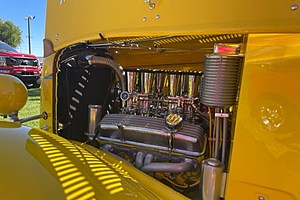 This must be a club or something.  That red really grabs your attention.

The same guy owns with white car and truck.  That hardly seems fair.  They are so cool.

I loved that car but if I owned it, I would have done chrome pipes.  But wow, what a cool car.

I think that's the car you drive when you show up at Harvard.

This guy restored this pickup truck but he also just finished this little VW barbecue grill.  It was for sale for $3,000 and yes, it is that cool.  The truck was cool too.

I love flames.  Some of the flame jobs we saw Saturday were stunning.

Thanks for a great day Santa Clara.  We'll see you there next year! 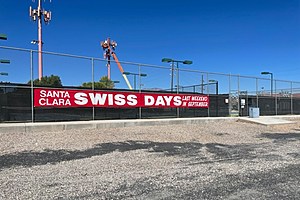 Source: What was YOUR favorite car at the Santa Clara Swiss Days car show?
Categories: Articles
Comments
Leave A Comment
Delish Corner: Fluffy Cinnamon Roll Recipe That Will Make You Drool
The Fairest Criticism of Kalani Sitake
HIPS: No Time For Drama In A Positive Life
HIPS: Make Family A Priority Before It’s Too Late
BYU Hoops At Home on KDXU, Win Or Lose
HIPS: Situational Awareness And Why We Should Be Living In Condition Yellow
Reaching out this holiday season: Washington City leaders, 1st responders visit lonely
FOX SPORTS RADIO IS HERE!
Cool Stuff to Do in Southern Utah Dec-Jan